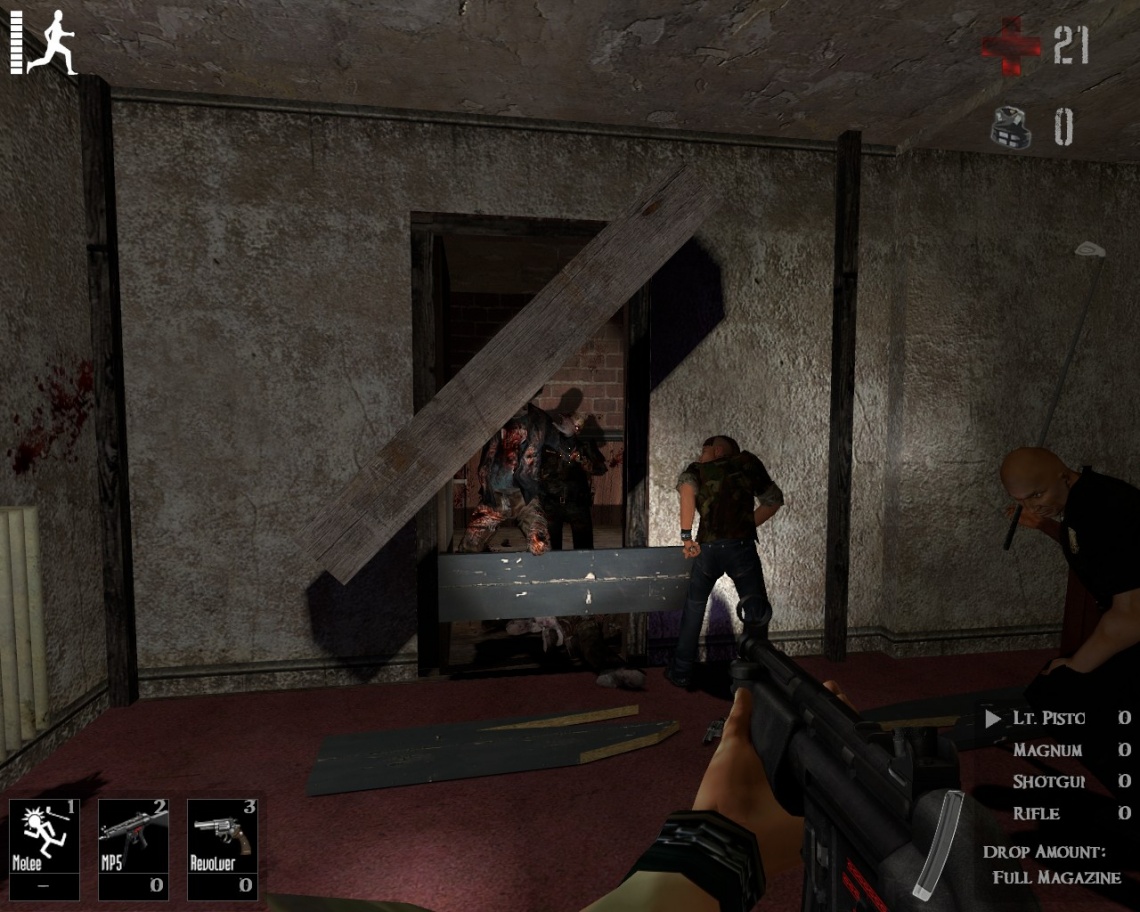 action
free to play
zombies
Release: 2007
The basic idea of Zombie Panic is to create solid gameplay that is based on a classic zombie outbreak scenario, the living dead are coming for the last remaining humans, and these survivors must fight them off and live through the day.

Everyone joins a server, in the beginning you can either choose to join the human team or you can volunteer to be the first zombie. If no one volunteers the game will pick one human randomly and the game begins. The starter zombie's goal is to, of course kill the humans while the human goal is to stay alive as long as possible, complete objectives, or even wipe out all the zombies. The catch is that when a human is slayed he will simply join the ranks of the undead, now ready to finish off his old living teammates.
The humans can't tell by the player list who's alive and who's not, eventually there will only be one survivor still standing if all goes wrong, facing all the zombies which used to be allies, with his back to a wall. The zombies only have a certain number of reinforcements (lives), when a zombie is killed they lose 1 life from the counter. However, when a human is killed they gain 1 life. If the zombies only have 1 respawn left the humans can win the round by killing off the remaining undead left on the map.

This is the main concept of how the game works but with additional game modes there is a bit more variety to it.

Speed - A zombie can only run at about 80% of the top speed of a human player. Though, the more weaponry and ammo a human picks up, the more it will slow him down tremendously, making him an easy target for the undead. If carrying nothing a human can easily outrun a zombie. Watch out so you don't get cornered... Also, keep an eye on your fatigue meter so you don't have to rest while a horde of undead flesh is scratching your back.

Weapons - The humans have a wide selection of different weapons to use for defending themselves, like firearms, explosives and melee weapons. It is essential for humans to locate weapons and ammo around the map in order to survive. Since you only spawn with a random melee weapon and handgun, scavenging is a must. Remember that your inventory is limited and hogging weapons will slow you down, so sharing with your teammates is a must which also promotes teamwork.

Panic - If you find yourself cornered and must make a quick escape, the Survivors have the ability to use the Panic feature. Panic will make you drop all your inventory to gain speed and a temporary energy boost.

Numbers - At the beginning of the round, there are only few zombies (depending on the amount of players) and everyone else is a Survivor. This means that they can easily watch each others backs and provide covering fire. However, once their ammo starts to run dry and they begin to squabble amongst themselves for the few precious clips of ammo available...

Communication - Instead of typing messages to each other (occupying busy hands), which can be really dangerous when the zombies are lurking in the shadows, the humans have the ability to communicate by voice commands. There is a menu with several commands that can help the humans organize a defense, trade ammunition and request help.

Barricading - Survivors have the ability to set up a defense by pushing items or using barricade boards. This can help with their survival, but a barricade won't last forever.

Regeneration - Zombies will over time regenerate hit points making it more difficult for survivors to make dead the undead.

Carrier - The first Zombie of the round differ a lot from the other undead, he looks different, sounds different and have abilities that the average zombie can only dream of. He is the Carrier! With the power to infect people (10% infection chance per hit by default) he will cause panic and paranoia amongst the living.

Persistence - Zombies may seem to die often, but they won't give up. They just keep re-spawning over and over until your pistol runs out of bullets, your back is to the wall, and there is no escape.

Numbers - Later on in the game, as the undead ranks swell with the freshly dead, the last few humans will find their superior weaponry small compensation for the hordes of zombies that close in.

Zombie Vision - With the zombies not being able to use a flashlight, we have given them the ability to use Zombie Vision. Z-vision works in a way that it brightens up any possible light source in a room to make it more viewable. More importantly, humans that keep active will slowly begin to glow red making it easier for a zombie to track their prey. To prevent games of hide and seek a survivor over a period of time of sitting still will also start to glow red by fear of the unknown.

Berzerk and Lunge - The zombies have a "Feed-O-Meter" that they can charge up by hitting and damaging survivors. With your stamina you can either choose to lunge, giving you a few seconds of sprint speed that can be a great advantage when attacking a Survivor. Or you can choose to save your Feed-o-Meter bars and charge up your Berzerk. Berzerk gives you 10 seconds of lungespeed and faster attackrate, Survivors will have a hard time facing you upclose.

We want the mod to feel creepy and give you a sense of desperation, and yet not take itself so seriously that you can't laugh at the way you got slayed. Overall fun and replayability is the priority, where realism and horror while important are just a bonus when possible. We want a mod that you can easily play with any number of people and still enjoy it. Plus, there's a certain sense of satisfaction in tearing apart the heartless survivors who failed to protect you while you were alive, limb by limb.
Read Full Description
Get This Game 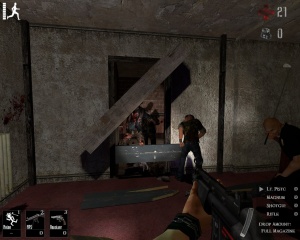 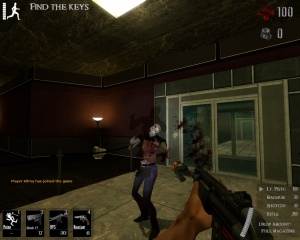