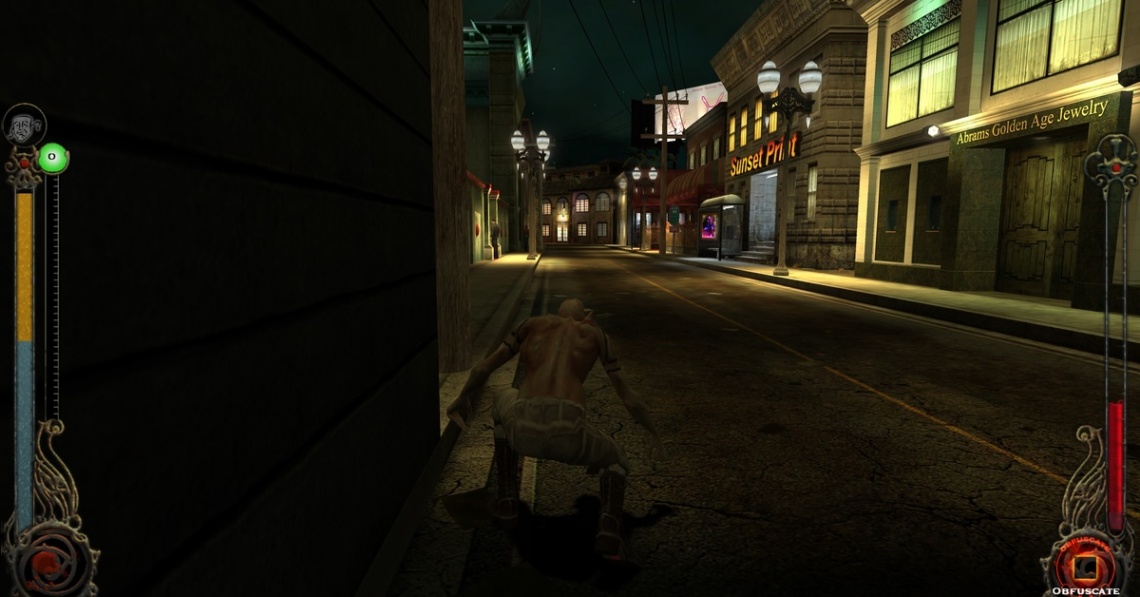 action
adventure
arp
horror
rpg
single player
Release: 2004
Bloodlines is an action role-playing video game optionally presented from the first- or third-person perspective. Before the game begins, players create a male or female vampire character by selecting a vampire clan and configuring available points in three areas—Attributes, Abilities and Disciplines (vampiric powers)—or by answering questions, which create a character for the player. The player can select one of seven vampire clans: the powerful Brujah, the decadent Toreador, the insane Malkavian, the aristocratic Ventrue, the monstrously-deformed Nosferatu, the blood-magic wielding Tremere, or the animalistic Gangrel.
The player builds their character by spending acquired points to increase their ratings in the three areas. The points spent on Attributes and Abilities combine to determine a player's success or effectiveness in performing tasks such as using firearms, brawling, and lock-picking; for example, determining how accurate or how far the player can shoot, or if they can hack a computer. Attributes are represented by physical (strength, dexterity, and stamina), social (charisma, manipulation, and appearance), and mental (perception, intelligence, and wits). Abilities are talents (such as brawling and dodging), skills (such as firearms and melee) and knowledges (such as computers and investigation). The player is initially assigned points to spend in the three areas, with the amount they can spend determined by clan; for example, the Brujah can spend the most points on physical and skill attributes. During character creation, each upgrade costs one point. The upgrade cost increases as the game progresses. Each ability can be raised from zero to five, and it is impossible to accrue enough experience points to complete every skill (allowing the player to specialize or balance their character). Experience points are gained by completing quests, finding items or unlocking secret paths, rather than killing enemies, and are used to increase or unlock the character's statistics and abilities. The game features a main story, and optional side quests that can be completed at any time; the player is able to move between the available areas at will to revisit locations, characters, or merchants.
The player's clan affects their skills and powers. Although the attractive Toreadors receive bonuses for seduction and persuasion, opening additional dialog options, they are physically weak; the Nosferatu are forced to travel in the shadows or through sewers to avoid alerting humans, but receive bonuses to their intelligence and computer skills, which enables access to more information. The Malkavians have separate dialog options, reflecting their inherent insanity.[8] Upgrading some skills provides additional dialog options; attractive and charismatic characters seduce to get their way, aggressive characters threaten, and others persuade their targets to cooperate.

Firearms combat is first-person, with character points assigned to the firearms skill determining the shot's accuracy and how long it takes to target an opponent. Melee combat is third-person, with access to weapons such as katanas and sledgehammers for melee combat, or pistols, crossbows and flamethrowers for firearm combat. If a player sneaks up on an opponent, they can perform an instant kill; weapons provide unique instant kill animations. The player can block attacks manually or automatically, by leaving their character idle. They can use stealth in missions by sneaking past guards and security cameras, picking locks, and hacking computers to locate alternative routes.
Each clan has specific Disciplines, which can be used in combat and to create approaches to quests. Although some powers overlap clans, no two clans share the same three Disciplines. More physical vampires can enhance themselves to become fast and lethal killers or summon spirit allies to attack their foes; others can mentally dominate their targets to force their cooperation or render themselves invisible to hide from detection; and others can boil their opponent's blood from afar. Some Disciplines, such as Auspex (which boosts perception, highlighting other characters' auras through obstacles) and Blood Buff (which temporarily upgrades strength, dexterity, stamina and lockpicking), are common to all vampires. Several abilities can be active at the same time. Blood is a primary currency in Bloodlines, used to activate Disciplines and abilities. It is drained with each use, and can be replenished by drinking from rats, visiting blood banks or drinking from humans by attacking or seducing them; the player can feed on enemies during combat. Drinking from innocents for too long can kill them, costing a character humanity points.
Players are penalized for using certain vampiric abilities in front of witnesses; exposing their existence loses masquerade points, although additional masquerade points can be earned with quests and other actions. Violating the masquerade five times draws the ire of vampire hunters and loses the game. The player has humanity points, representing the vampire's humanity. Some actions cost humanity points; a low humanity score alters available dialog options to become more aggressive, and increases the chance of entering a frenzied state and embarking on a killing spree, when the vampire's blood is low. This frenzy can also be triggered by a large amount of damage. Like masquerade points, losing all humanity points ends the game, with the vampire becoming a mindless beast. Some areas, known as Elysium, prevent the use of Disciplines or weapons.[ Players can recruit a female ghoul, Heather, as a customizable servant who gives them blood, gifts, and money.


This article uses material from the Wikipedia article Vampire: The Masquerade – Bloodlines, https://en.wikipedia.org/wiki/Vampire:_The_Masquerade_–_Bloodlines, which is released under the Creative Commons Attribution-Share-Alike License 3.0, https://creativecommons.org/licenses/by-sa/3.0/.
Read Full Description
Get This Game 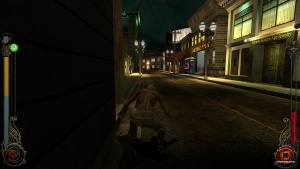 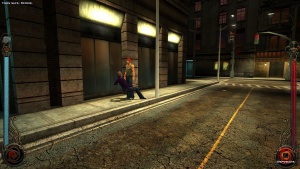