action
rpg
single player
strategy
Release: 1983
Exodus featured revolutionary graphics for its time, as one of the first computer RPGs to display animated characters. Also, Exodus differs from previous games in that players now direct the actions of a party of four characters rather than just one. During regular play the characters are represented as a single player icon and move as one. However, in battle mode, each character is represented separately on a tactical battle screen, and the player alternates commands between each character in order, followed by each enemy character having a turn. This differs from the two previous games in the Ultima series in which the player is simply depicted as trading blows with one opponent on the main map until either is defeated. Enemies on the overworld map can be seen and at least temporarily avoided, while enemies in a dungeon may appear randomly without any forewarning.
This article uses material from the Wikipedia article Ultima III: Exodus,
https://en.wikipedia.org/wiki/Ultima_III:_Exodus which is released under the
Creative Commons Attribution-Share-Alike License 3.0,
https://creativecommons.org/licenses/by-sa/3.0/.
Read Full Description
Save & Play Game Later
Images & Video 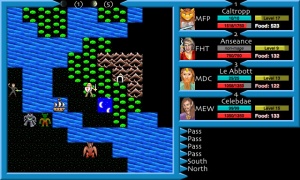