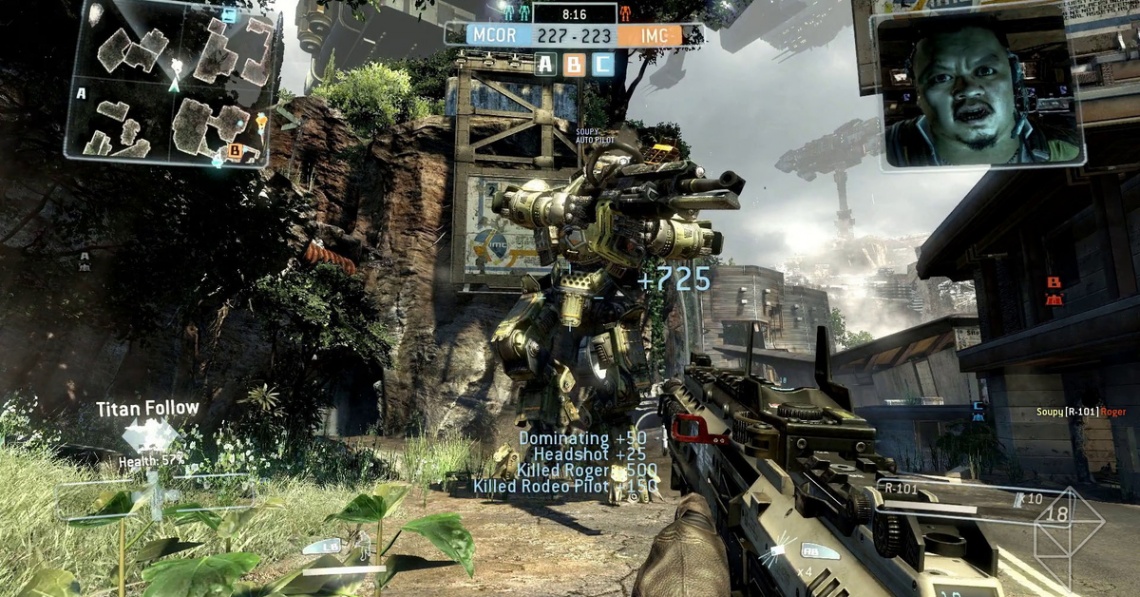 fps
Release: 2014
Titanfall is a shooter game played from a first-person perspective. Players fight as free-running foot soldier "pilots" who can command agile, mech-style exoskeletons—"Titans"—to complete team-based objectives. The game is set on derelict and war-torn colonies at the Frontier fringe of space exploration as either the Interstellar Manufacturing Corporation (IMC) or the Frontier Militia.Online multiplayer is the sole game mode, but contains single-player elements such as plot, character dialogue, and non-player characters (NPCs). Titanfall has no offline, single-player, or local splitscreen modes, and does not support system link over a local area network (LAN). Respawn founder Vince Zampella described the game as bringing "scale, verticality, and story" to the first-person shooter genre of multiplayer gaming.
Up to twelve human players choose their pilot types and are dropped on the map, beginning the game. Titans can be deployed periodically, based on an onscreen timer, which must complete its countdown to zero before a Titan can be summoned. Killing other players reduces the amount of time remaining. When summoned, players are told to "standby for Titanfall", whereupon a Titan drops from the sky, surrounded by a protective forcefield. Unlike player-characters in games like Call of Duty and Battlefield, pilots are agile and accumulate momentum while running (similar to Tribes). Players run on walls, double jump with a jet pack, vault over obstacles, glide across ziplines, and chain together combos. Pilot and Titan controls are identical except where the pilot's double jump becomes the Titan's dash, as Titans cannot jump. The Titans, somewhere between battle tanks and a mecha, are slower than the nimble pilots. Battles include artificial intelligence soldiers (human grunts and robotic spectres) that are designed as human player competition, support, and scenery. Games end with a race to the losing team's evacuation dropship.
The pilot's tactical abilities include x-ray vision, invisibility cloaking, and regenerating speed boosts. Pilots use ten traditional customizable weapons, including a semi-automatic shotgun, machine guns, assault rifles, sniper rifles, and the Smart Pistol Mk5. The latter locks onto multiple targets before firing multiple shots in a burst. Players generally require three Smart Pistol shots to die. The pistol can also shoot around corners. All pilots have anti-Titan weapons equipped. Pilots can hop on a Titan's back to "rodeo" and shoot its weak spot, or otherwise use four anti-Titan weapons to take them down. Player-pilots can eject from Titans that take too much damage, and the Titan replacement timer is reset upon the Titan's death.
There are three unique Titan classes, variants of light, medium, and heavy, with inversely related speed and armor: the all-rounder Atlas, the bulky Ogre, and the fleet-footed Stryder. The latter two chassis are unlocked upon finishing both faction campaigns and were later made unlockable by leveling up as well. Each chassis has a respective Core power that works on a cooldown timer: respectively, increased damage, increased shields, and unlimited dashes. Titan tactical ability options include stopping enemy ammunition in midair to throw back in their direction, emitting electrified smoke to hurt and repel pilots climbing the Titan's back, and deploying a defensive wall. Additionally, players can equip two perk kits to customize for their preferred strategy. Their primary weapons include rocket launchers, lightning cannons, and chainguns. Titans can act autonomously when put in guard and follow modes, which directs the Titan either to protect their vicinity or to tail their pilot, respectively.
There are 15 multiplayer maps and five multiplayer modes in the base game. In Attrition, a traditional Team Deathmatch, teams compete for the greatest kill count, and bot kills and Titan kills are counted. Pilot Hunter is similar to Attrition, but only counts pilot kills. In Hardpoint Domination, the object is to capture and defend areas of the map. In Last Titan Standing, players begin the match in Titans and have a single life. There is also a Capture the Flag mode. All modes are team-based and there are no free-for-alls. Completing challenges unlocks new abilities, weapons, customization opportunities, and burn cards: single-use, single-life power-ups that bestow a temporary gain, such as reduced Titan drop waits, unlimited grenades weapons, or disguise as a computer-controlled Spectre. Players can bring up to three cards into a match. Through multiplayer matches, players earn experience points that unlock new equipment and perks. Players who reach level 50 can "regenerate" to back to level 1, trading their rank and unlocks for faster experience gain and a prestige icon next to their names.
The game's "campaign multiplayer" is separate from the game's regular multiplayer (called classic internally), and serves as an extended tutorial. It plays as multiplayer with single-player elements, such as scripted cinematic sequences, non-playable character dialogue, an in-game soundtrack, and audio briefings. There are separate campaigns for the Militia and IMC factions, and the game randomly assigns the player to one for a series of nine maps. Each mission is paired with a specific game type and map, supplemented by minimal voiceover narration, which was later removed. The Militia are the civilian military of the Frontier and the resistance against IMC use of colony resources. Their most important members include Titan War veteran and former mutiny leader MacAllan, intel specialist and engineer Bish, and Marauder Corps leader Sarah. The corporate conglomerate IMC specializes in natural resource extraction, and came to the resource-rich Frontier for business. Their major players are Frontier operations commander-in-chief Vice Admiral Graves, intel specialist Blisk, and artificial intelligence companion Spyglass. 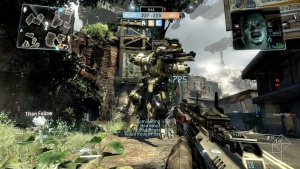 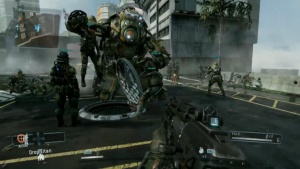