2d
action
adventure
multiplayer
single player
strategy
Release: 1992
Sonic the Hedgehog 2 is a 2D, side-scrolling platform game. The game stars Sonic the Hedgehog and his sidekick, Miles "Tails" Prower, who is described as having idolized Sonic as a child and wanting to keep up with him. At the game's start, the player can select to either play as Sonic, Tails, or both. The difference between the two is purely cosmetic; the two both have identical abilities. In the latter mode, players control Sonic while Tails runs along beside him. A second player can join in at any time and control Tails separately. The game takes place over a series of levels, each divided into one, two, or three acts with a boss fight with Robotnik at the end of the last act. Certain levels have features that are unique to them; for example, Emerald Hill has corkscrew-like loops, and Chemical Plant has boost pads that instantly put Sonic at his top speed. The character can jump on enemies to defeat them; the game also introduces a new move, the "spin dash" or "Super Dash Attack", by which the player curls in a ball and spins while stationary, resulting in a speed boost. When the player is attacked by an enemy without rings, is crushed, falls off-screen, or exceeds the act's ten-minute limit, they lose a life and return to the most recently passed checkpoint. Dying with zero lives gives the player a game over.

This article uses material from the Wikipedia article Sonic the Hedgehog 2,
https://en.wikipedia.org/wiki/Sonic_the_Hedgehog_2 which is released
under the Creative Commons Attribution-Share-Alike License 3.0,
https://creativecommons.org/licenses/by-sa/3.0/.
Read Full Description
Get This Game 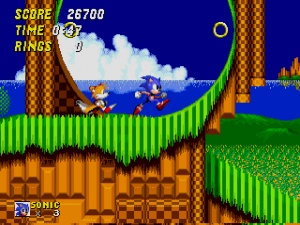