city building
strategy
Release: 1989
SimCity is an open-ended city-building video game series originally designed by developer Will Wright. Developed in Orinda, California, it is published by Maxis (now a division of Electronic Arts) and has spawned several different editions that have sold worldwide, with the first game in the series, SimCity, published in 1989. The ongoing success of SimCity has also sparked the release of many other spin-off "Sim" titles, including 2000's The Sims, one of the best-selling computer games. 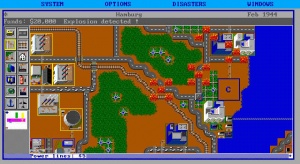