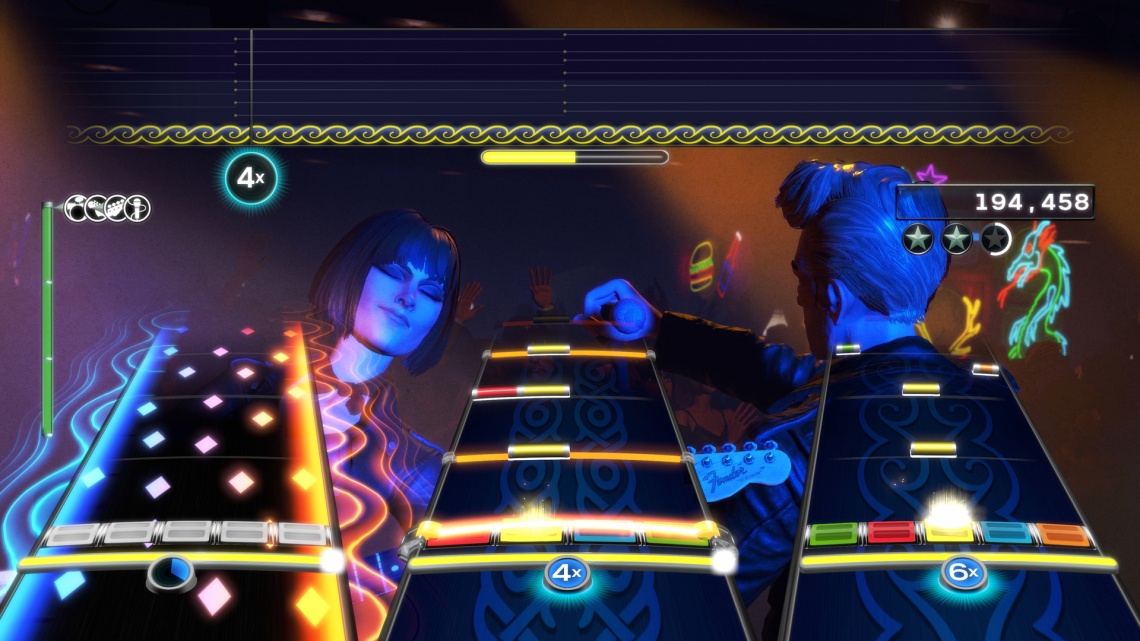 multiplayer
music
rhythm
Release: 2015
he gameplay of Rock Band 4 follows that from previous games in the series: the player or group of players use special instrument-based controllers or microphones to mimic playing the instruments by following scrolling cues on screen and attempt to play through a song and score points. Players score points for successfully hitting notes, earning a scoring multiplier for hitting a continuous series of notes without mistakes, while failure to hit the right notes can penalize the players' performance and could end the song prematurely. During the song, certain phrases are marked with specially colored notes, which if played correctly, fills the player's Overdrive meter. Once sufficiently filled, the player is able to trigger "Overdrive" through various means depending on instrument, which doubles their scoring multiplier as well as boosting the band's overall performance meter. Players are rated using a five-star system based on their score, and possibly earning a gold star rating if playing on Expert difficult with a high score.

At Rock Band 4 release, the game supported three main modes. Quickplay allows the players to select any song to play that is on disc or in the downloadable content library of songs. Players can also engage in Shows which are a series of songs broken up into a number of sets. Some songs in these Shows are predetermined, but others are left to be voted on during a short period between songs by the band members; individual members also have the opportunity to select a song from a limited list during periods of the current song when their musical part is inactive. The available options are based on what songs the collective band members have in their library and the band's chosen theme, and voting options may include specific songs (including one selected mid-song), or broad classifications such as by genre type, release year, or song length. To aid in the cooperative nature of the game, any scoring multipliers and remaining Overdrive are carried over between songs in Gig lists as well as between sets in the Career mode.


This article uses material from the Wikipedia article Rock Band 4, https://en.wikipedia.org/wiki/Rock_Band_4, which is released under the Creative Commons Attribution-Share-Alike License 3.0, https://creativecommons.org/licenses/by-sa/3.0/.
Read Full Description
Get This Game 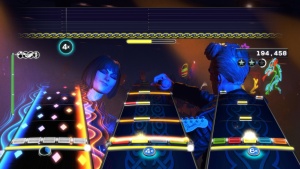 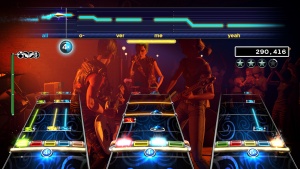