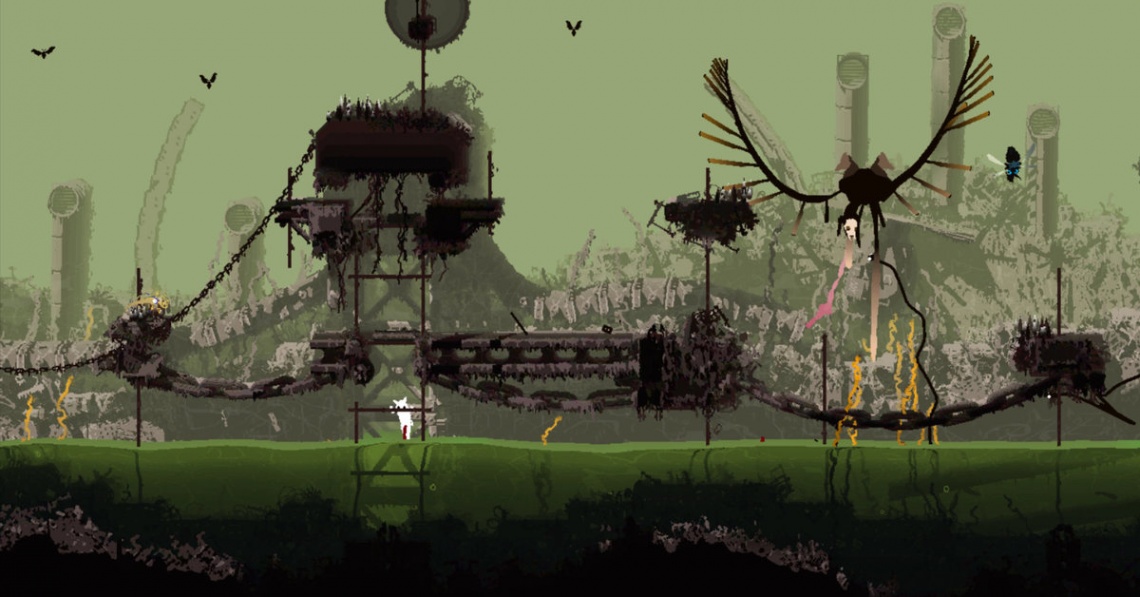 2d
action
adventure
apocalyptic
horror
indie
open world
platform
single player
survival
exploration
Release: 2017
The player's character, part-slug and part-cat, uses spears and rocks to survive a hostile, ruined, and obtuse 2D world in search of the family from whom it was separated.[1][2] The player is given little explicit guidance and is free to explore the world in any direction[2] via pipes and passages that pass through 1600 static screens, each with randomized enemies.[3][4] Through jumping and using debris as weapons, the Slugcat escapes enemies to forage for sparse food used to hibernate in scarce, designated safe rooms. Hibernation resets the day cycle and saves the player's progress. The player can move between regions by having the Slugcat hibernate multiple times without dying. If the player does not reach the hibernation point in time, a crushing rain will begin to pour that can pummel the Slugcat to death and otherwise flood the world.[2]
Upon death, the Slugcat returns to the last hibernation save point and loses any map progress made since. The player also loses a karma point, which are indicated at the bottom of the screen. The player needs to meet a karmic threshold to reach specific areas of the game. Karma is restored upon reaching a new hibernation area, and the player can shield their current karma level by eating a yellow flower before dying. The flower appears at the start of each area and is re-planted wherever the Slugcat dies.[1]
Enemies range from camouflaged plants to large vultures to Komodo dragon-like lizards and huge leviathan in water. Many enemies can kill the Slugcat in one hit, and some species have internal variation, such as the pink lizards that can climb. The enemies spawn at random, such that the player cannot progress through trial and error experimentation.[2] These creatures possess dynamic AI and exist in the game's world perpetually, even when not on the same screen as the player.[5] The player does, however, need to experiment with spears to climb walls and knock fruit out of trees.[1] The Slugcat can hold two objects at once and switch between them.[3] It can also eat power-up plants, which grant status effects,[2] such as slowing time.[1]
Rain World's setting is destroyed by ecological catastrophe and illustrated in pixel art. Its story is communicated through details in the environment, images during hibernation, and holograms from a worm that monitors the Slugcat.[2] The game offers little to guide the player, apart from the worm, who gives some hints about where to go and what to collect towards the beginning of the game. The player can view a map to check their progress through the large in-game world,[6] and this can help to reach the game's multiple endings.[7]


This article uses material from the Wikipedia article Rain World, https://en.wikipedia.org/wiki/Rain_World, which is released under the Creative Commons Attribution-Share-Alike License 3.0, https://creativecommons.org/licenses/by-sa/3.0/.
Read Full Description
Get This Game 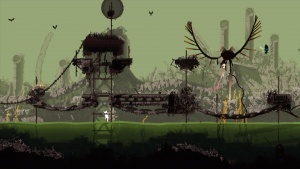 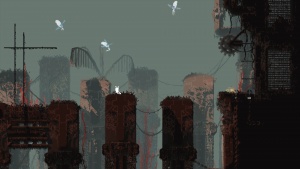