action
fps
Release: 2011
The game primarily consists of first-person shooter and driving segments, with the player using their vehicle to explore the world and travel between missions.
Combat is undertaken from a first-person perspective; the player is armed with a variety of upgradeable firearms, as well as a crossbow, and boomerang-like weapons called "wingsticks" which can be used for stealthy attacks. There are several types of ammunition available for each weapon, to allow the player to further customize their play style. As an example, the crossbow's primary ammunition is metal bolts, but it also can shoot electrified bolts, explosive bolts, and more. There are two standard varieties of enemies: enemies with firearms which will take cover and exchange fire with the player, and melee enemies that will charge the player and attack with melee weapons.
There are a variety of vehicular events for the player to participate in, including races and checkpoint rallies. Racing events may or may not have opponents, and some of them are armed races while others are not. Players have the ability to augment their cars with various items and upgrades they can gain by completing events. Rage also features some role-playing game (RPG) elements, including an inventory system, looting system, and different types of ammo. Players have the option to customize their weapons and vehicles, as well as build a wide assortment of items using collected recipes.[citation needed] Not only can the vehicles be used for racing, but, like all open-world sandbox games, they can be used for traveling from one location to the other with occasional attacks from enemy vehicles. There are also side missions and a number of other minor exploratory elements. 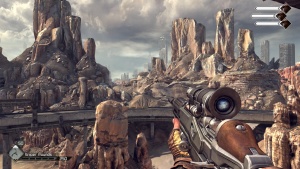