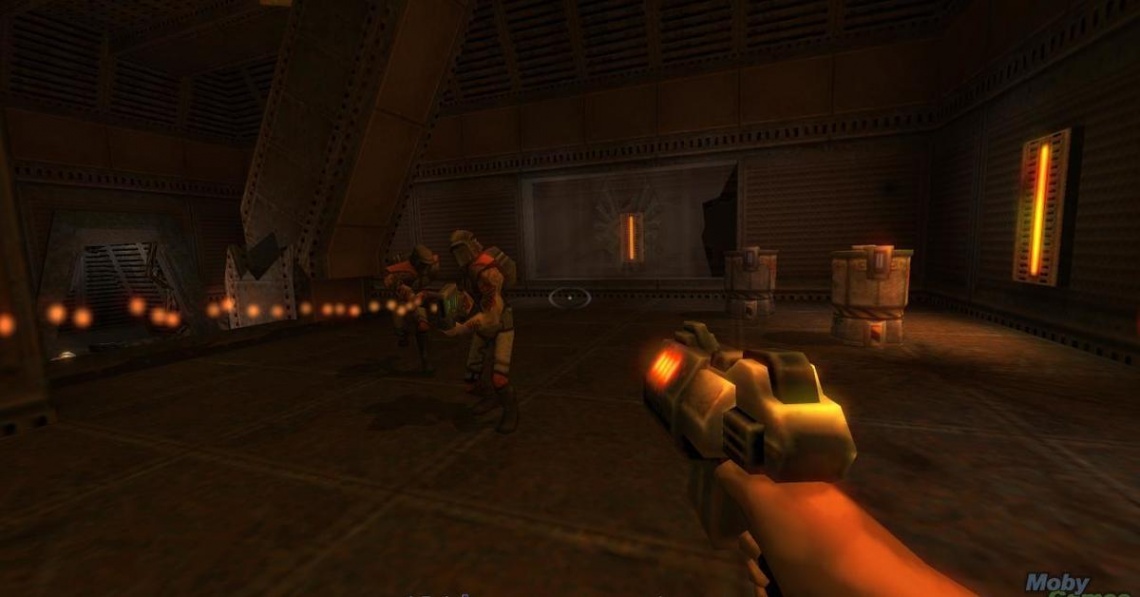 action
fps
shooter
Release: 1997
The game is played in general first-person shooter paradigms, in which the player shoots enemies from the perspective of the main character. The gameplay is very similar to that featured in Quake, in terms of movement and controls, although the player's movement speed has been slowed down, and the player now has the ability to crouch. The game retains four of the eight weapons from Quake (the Shotgun, Super Shotgun, Grenade Launcher, and Rocket Launcher), although they have been redesigned visually and made to function in slightly different ways. The remainder of Quake's eight weapons (the Axe, Nailgun, Super Nailgun, and Thunderbolt) are not present in Quake II. The six newly introduced weapons are the Blaster, Machine Gun, Chain Gun, Hyperblaster, Railgun, and BFG10K. The Quad Damage power up from Quake is still present in Quake II, and new power-ups include the Ammo Pack, Invulnerability, Bandolier, Enviro-Suit, Rebreather, and Silencer.
The single player game features a number of changes from Quake. First, the player is given mission-based objectives that correspond to the storyline, including stealing a Tank Commander's head to open a door and calling down an air-strike on a bunker. CGI cutscenes are used to illustrate the player's progress through the main objectives, although they are all essentially the same short piece of video, showing a computerized image of the player character as he moves through game's levels. Another addition is the inclusion of a non-hostile character type: the player character's captured comrades. It is not possible to interact with these characters, however, as they have all been driven insane by their Strogg captors.
The game features much larger levels than Quake, with many more wide open areas. There is also a hub system that allows the player to travel back and forth between levels, which is necessary to complete certain objectives. Some of the textures and symbols that appear in the game are very similar to some of those found in Quake. Enemies also demonstrate visible wounds after they have taken damage.
Multiplayer[edit]
The multiplayer portion is similar to that of Quake. It can be played as a free-for-all deathmatch game mode, a cooperative version of the single-player game, or as a 1 vs 1 match that is used in official tournaments, like the Cyberathlete Professional League. It can also be played in Capture the Flag mode (CTF). The deathmatch game benefited from the release of eight specifically designed levels that id Software added after the game's initial release. They were introduced to the game via one of the early patches, that were released free of charge. Prior to the release of these maps, players were limited to playing multiplayer games on the single-player levels, which, while functional as multiplayer levels, were not designed with deathmatch gameplay specifically in mind.
As in Quake, it is possible to customize the way in which the player appears to other people in multiplayer games. However, whereas in Quake, the only option was to change the color of the player's uniform unless third party modifications were used, now the game comes with a selection of three different player models: a male marine, a female marine, and a male cyborg; choice of player model also affects the speech effects the player's character will make, such as exhaling in effort while jumping or groaning when injured. Each model can be customized from in the in-game menu via the selection of pre-drawn skins, which differ in many ways; for example, skin color, camouflage style, and application of facepaint. 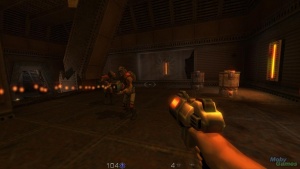 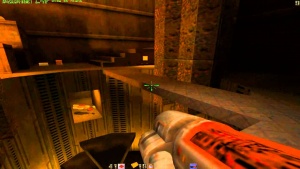