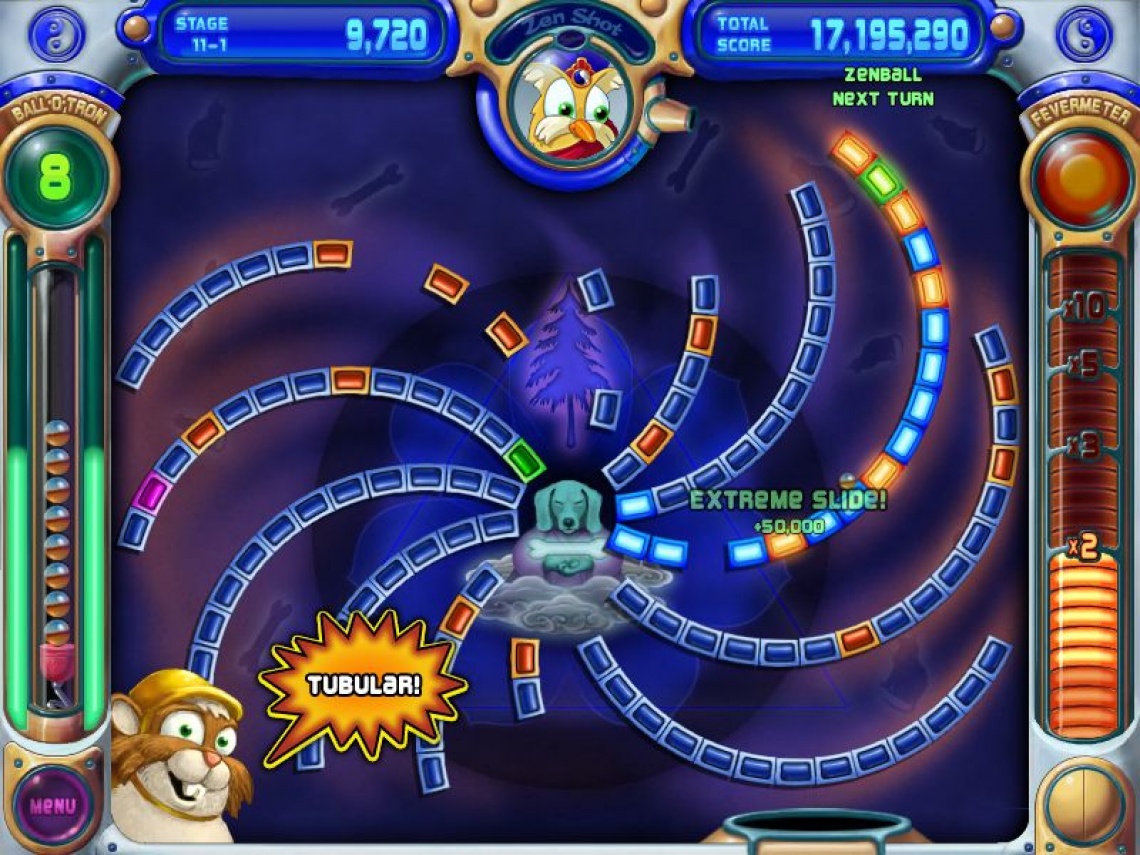 2d
arcade
casual
puzzle
single player
Release: 2007
Within the game's main "Adventure" mode, Peggle is divided into fifty-five levels. Each level features an arrangement of approximately one hundred blue "pegs", positioned to correspond with the level's background picture, inside of three walls on the top and sides (leaving the bottom opened), along with other fixed and moving features. The goal of each level is to clear the board of the twenty-five random pegs that are turned orange at the start of the level, by using a ball launcher located at the top center of the screen to strike one or more of the pegs. Pegs light up when hit, and once the ball either falls through the bottom of the screen or is caught by the ball catcher that moves back and forth along the bottom in a fixed manner, the pegs will be removed. Struck pegs are also removed if the ball is stuck on them. The player begins each level with ten balls (twelve on the non-Touch iPod version) to clear the orange pegs, but may earn more by landing the ball in the ball catcher, or by earning high scores on single shots. Failure to clear the board with the allotted number of balls will require the player to restart the level, while completing this objective will allow the player to progress forward to the next board.

Every five levels in the Adventure mode correspond to playing with one of ten "Peggle Masters", cartoon characters that help the player. Each of the Peggle Masters has a unique special ability that is activated when the player strikes one of the two randomly selected green pegs on the board. Some abilities activate immediately; one ability causes a second ball to be generated from the green peg when struck. Other abilities will have effects that activate on the next shot or for several more shots; one ability shows the ball's path including rebounds, while another will extend the length of the ball catcher. In the final five levels of the Adventure mode, called "Master" levels, the player can select which of the Peggle Masters they want to use.

In addition to clearing the board, the player is challenged to get high scores with each shot. Points come from two main sources: striking pegs, and style points. Each struck peg earns points, with further bonuses gained by hitting numerous pegs on a single shot, and by clearing orange pegs, which builds up a scoring multiplier up to 10x when all but a few orange pegs remain. Additionally, for each shot, one random blue peg will be marked purple and revert to blue after the shot if it is not struck; striking this peg will further boost the player's score. Style points are awarded for making difficult shots such as striking two orange pegs consecutively that are a distance apart, or by getting lucky bounces off the ball catcher. When the player clears the board of orange pegs, as announced by the song "Ode To Joy" and the message "Extreme Fever", the bottom of the level is replaced with five bins of different point values that the ball will fall into. The player is awarded this score in addition to any unused balls remaining to get their final score for the level. If all the pegs on a level are cleared, a bonus is awarded and all the bins turn to the maximum value and the message "Ultra Extreme Fever" is displayed.

In addition to the Adventure mode, the game features a series of challenges that require the player to complete boards under stricter requirements, such as having to clear more orange pegs or remove every peg from the board. A "Duel" mode allows the player to compete against another person or a computer AI on the same board in attempting to reach the highest score. The Xbox Live and PlayStation Network versions add a "Peg Party" mode, in which up to four players compete on their own boards using a limited number of balls, each attempting to get the highest score. In each of these modes, the game generally offers the ability for players to select which Peggle Master they wish to use.

This article uses material from the Wikipedia article Peggle, https://en.wikipedia.org/wiki/Peggle, which is released under the Creative Commons Attribution-Share-Alike License 3.0, https://creativecommons.org/licenses/by-sa/3.0/.
Read Full Description
Get This Game 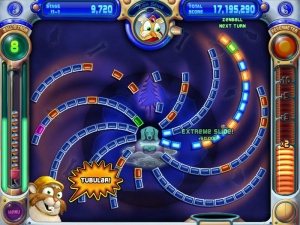 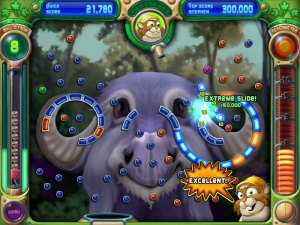 Perception
Recommended for you

Pet Rescue Saga
Recommended for you