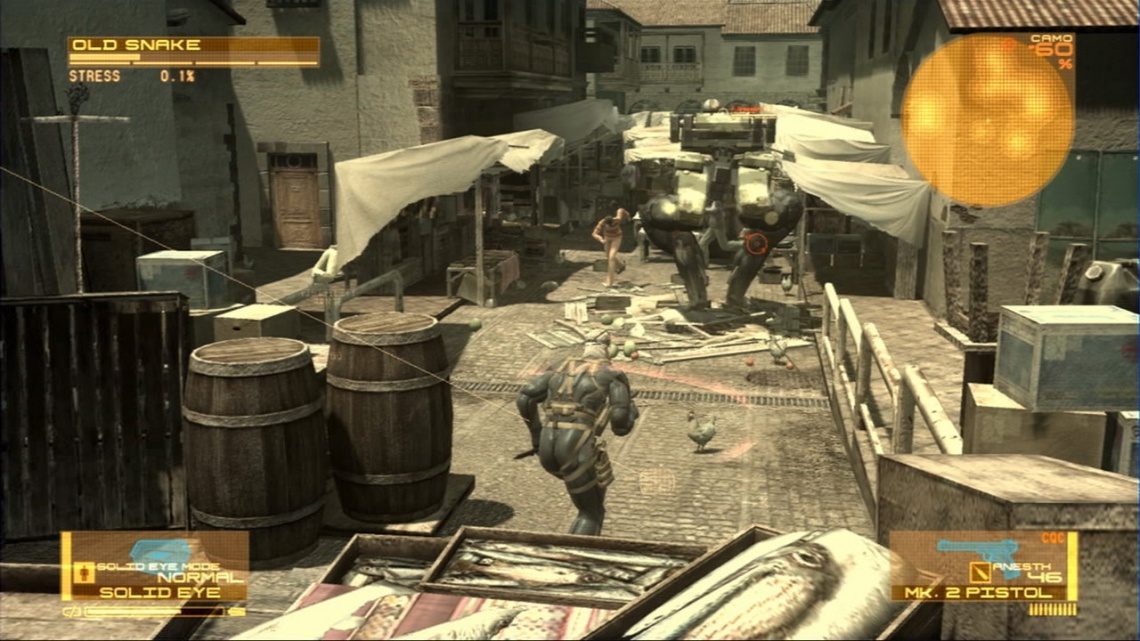 action
adventure
shooter
Release: 2008
In MGS4, players assume the role of an aged Solid Snake (also referred to as Old Snake), using stealth, close quarters combat, and traditional Metal Gear combat. The overhead third-person camera of earlier games has been replaced by a streamlined view and over-the-shoulder camera for aiming a weapon, with an optional first-person view at the toggle of a button.

A further addition to gameplay mechanics is the Psyche Meter. Psyche is decreased by non-lethal attacks and is influenced by battlefield psychology. Stressors (including temperature extremes, foul smells, and being hunted by the enemy) increase Snake's stress gauge, eventually depleting his Psyche. Adverse effects include difficulty in aiming, more frequent back pain and the possibility of Snake passing out upon receiving damage. Among the available methods of restoring Psyche are eating, drinking, smoking, and reading an adult magazine.

Snake has a few gadgets to aid him in battle. The OctoCamo suit mimics the appearance and texture of any surface in a similar fashion to an octopus, or a chameleon, decreasing the probability of Snake being noticed. Additionally, FaceCamo is made available to players after they defeat Laughing Octopus. FaceCamo can be worn by Solid Snake on his face and it can be set to either work in tandem with the Octocamo or instead mimic the face of other in-game characters. However, to get access to these unique FaceCamos, players have to complete certain in-game requirements first. When the FaceCamo is worn with OctoCamo, under ideal conditions, Snake's stealth quotient can reach 100%. The Solid Eye device highlights items and enemies and can operate in a night vision and a binocular mode. It also offers a baseline map, which indicates the location of nearby units.[6] The latter function is also performed by the Threat Ring, a visualization of Snake's senses that deforms based on nearby unit proximity and relays them to the player.

Metal Gear Mk.II (later replaced with Mk.III), a small support robot that always tags along with Snake, offers codec functionality and a means to the in-game menu for a large part of Snake's mission. It can be remotely controlled to stun enemies, provide reconnaissance and interact with the environment. Its design is based on the namesake robot from Snatcher, a game designed by Hideo Kojima. It is also controlled during the beginning of each separate "Act", although the player is not able to utilize its capabilities during this time.

Whenever the Drebin menu is available, weapons, attachments, and ammunition can be purchased via Drebin Points (DPs), awarded for on-site procurement of weapons already in the inventory and by initiating specific scripted events or destroying Unmanned Vehicles. The conversion rate between weapons and DPs depends on current battlefield conditions, with more-intense fighting yielding higher prices. Also, Drebin would purchase items from the player at a discounted price, especially at certain points in the story and certain days in real life. The game may also be finished without killing anyone, using non-lethal weapons.

The Virtual Range, similar to the Virtual Reality training of previous titles, functions as a test facility for weapon performance and gameplay controls.

This article uses material from the Wikipedia article Metal Gear Solid 4: Guns of the Patriots, https://en.wikipedia.org/wiki/Metal_Gear_Solid_4:_Guns_of_the_Patriots, which is released under the Creative Commons Attribution-Share-Alike License 3.0, https://creativecommons.org/licenses/by-sa/3.0/.
Read Full Description
Get This Game 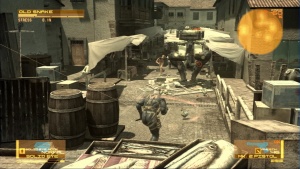 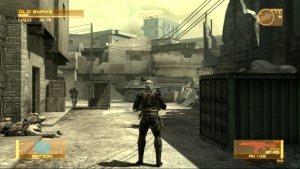