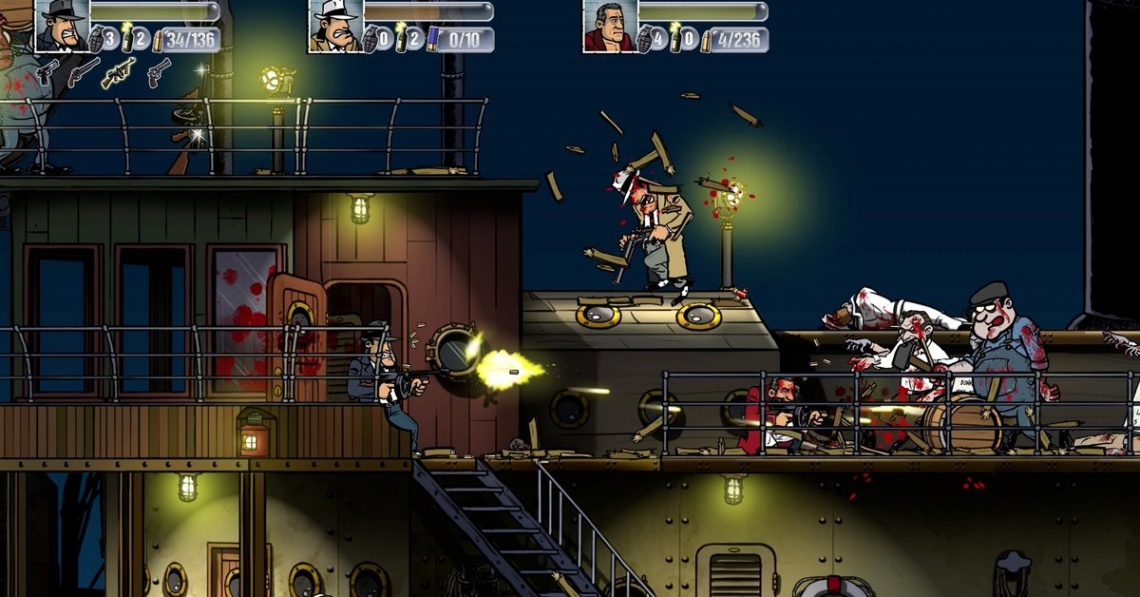 action
Release: 2015
Welcome to Thugtown in the roaring twenties. A city run by two rival mafia families who skirmish over every inch of the city to distribute their illegal liquor. Meet Vinnie Cannoli, a hard-boiled gangster who comes to Thugtown to straighten a few things out. Vinnie is sent to a messed up city, looking for a ‘goodfella’ who’s gone missing since the zombie-outbreak. Nothing that can’t be solved with a kind word with the local gangsters though. Especially when you’re packing a Tommy gun and a double barrel shotgun to be a little more persuasive. There’s only one thing that’s holding him back… Every friggin’ lowlife in the city turned into a flesh-eating maniac. This is survival horror, wiseguy style… Capiche?

Highlights
Action-Packed Gameplay: Prepare yourself for a non-stop, action-packed, completely over-the-top, platform game where you have to
fight, shoot, blast and kick your way through a deeply engrossing story. Not only will you have to take on the undead, but also rivalling gangsters
and government officials.


Local Co-op: Play together with your buddy when you join forces as Vinnie and Paulie. Help each other out in your battle against the undead and the other gangsters who try to make your life miserable.


Epic Gangster Story: Beneath the city overrun by zombies, there’s a dark story of conspiracy and betrayal. Unravel the sneaky mafia ways and government conspiracy while you try to look for your lost pal and for answers about the zombie-outbreak.


Immersive World and Period: Despite Prohibition and the imminent Depression, people are ready to drink themselves to (un)dead. Every
inch of the game is like a picture straight from the Prohibition era. The cars, the furniture, the Speakeasy clubs, the music and the weaponry
reflect the turbulent days of the roaring twenties.


theGameplay
As you can see in the trailer, we have chosen to make this game a platform shooter, facing zombies and mobs while surviving. But don’t worry, there’s more to it than just blasting everything away that lands before the barrels of your arsenal of guns. You will have to find a way through the city and find ways to get back out too. The environmental hazards will give the gameplay just that extra boost.

theStory
The game tells the story of Vinnie Cannoli and his mob family, set in the fictional Thugtown circa 1925, the height of prohibition. It seems the mob has been peddling some bad hooch and it has turned everyone into zombies. Vinnie is being summoned by the mafia to come to Thugtown to find a small time gangster called Frankie who’s gone missing since the zombie-outbreak. He seems to be of great importance for the local mob-gangs because when Vinnie arrives at thugtown the rival gangs are about to whack Frankie. It’s up to Vinnie to sort out what’s going on and discover the mystery behind the zombie-booze. Find out by playing the game!

theCharacters
Vinnie: Vinnie is a hard-boiled and fearless gangster who has the reputation to get the job done, no matter what the circumstances are. Honour and ethics are rather flexible terms for Vinnie. There are just two thing he cares about: his own skin and the green. Although he’s known to always fullfill his missions he’s infamous for his lack of subtility or elegance.

Paulie: Paulie is Vinnie’s right hand. He usually accompanies Vinnie on his missions. He’s as ruthless as Vinnie but doesn’t run an equally smart mouth. He’s more not really a talker but will bang you on the head with a basebalbat if you cross Vinnie or himself.

Frankie: Frankie is a small-time gangster who usually works himself into trouble by trying to make an extra dime on the side. Although he is a made men, he doesn’t quite fit in with the rest of the goons. They tollerate him because of his special abilities.

Enemies: Obviously the main group of enemies are the typically, decaying zombies. At first, they’ll all look the same but when you meet them face to face they will attack on their own special way. Vinnie will encounter fast, slow, shooting, exploding, floating, throwing, bashing, gassing, melting zombies.
But they are just the enemies that gets Vinnie warmed up. The real danger lies in the other, rival gangsters. They are armed to the teeth and looking for a stranger to pump full of lead and take the blame for everything that has gone wrong in Thugtown.

theTeam
Crazy monkey studios and Claeysbrothers joined forces on this game. The two studios both consist out of two guys. So there’s a four-headed team working on the game as we speak. Check out the picture below where we’re all enjoying a cannoli snack during working hours.


On the far left, the guy with
Read Full Description
Save & Play Game Later
Images & Video 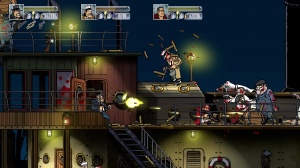 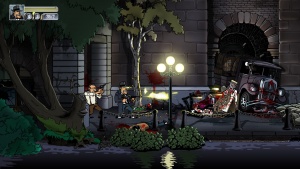