base building
multiplayer
simulation
single player
strategy
turn based
Release: 1996
Fantasy General is a turn-based game situated in a high fantasy world. The player can play either a single scenario against a computer or human opponent or a campaign. There are two sides, Good and Evil, each with unique units, though they share unit equivalents.

In campaign mode, the player selects one of four heroes and sets out to defeat the Shadowlord and his four generals, evil counterparts to the heroes. It concludes with the liberation of four continents and final defeat of the Shadowlord at the Fire Isle. 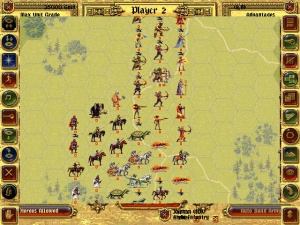