rpg
Release: 2014
Fable is a role-playing video game where players control their character from a third person perspective. The main character, known as The Hero of Oakvale, can interact with people and objects as well as battle foes. The goal of Fable is to complete missions called quests that advance the game's plot, but Fable also features optional quests and allows players to pursue actions not directly tied to story completion.[3]
Most quests are acquired at a central location, known as the Heroes' Guild; required quests are marked with a gold symbol and advance the game's story, while optional quests are coloured silver and can be completed in any order. Some quests allow players to pick sides and aid either evil characters, such as bandits, or good characters, such as traders and guardsmen. Players can also boast after accepting a quest, wagering some of the quest's reward gold in exchange for a larger return if the player accomplishes their bet, such as sustaining no damage or undertaking the quest naked. Each quest's completion gives players gold, which can be used to buy weapons and items, and renown, which affects the way townspeople react to the Hero. Heroes also earn trophies of their victories, which can be displayed to large groups of townspeople to earn more renown.
In addition to fighting with melee weapons (such as swords and maces) and ranged weapons (longbows and crossbows), Heroes can learn and use spells to empower their abilities, ward off damage, or harm foes. As players complete quests or defeat enemies, they gain general experience as well as experience based on whether they used melee attacks, ranged weapons, or magic; these bestow Strength, Skill, and Will experience, respectively. Experience can be spent at a platform in the Heroes Guild to level up attributes.[4] General experience can be used to modify all groups of attributes. Strength experience can only be used to modify three attributes: Physique, Health, and Toughness. The same applies to Skill which can only modify Speed, Accuracy, and Guile. Will can be used to upgrade your total magic power or to learn and upgrade spells which are broken into three groups, Attack Spells, Surround Spells, and Physical Spells. The experience the main character gains can be multiplied during combat through the combat multiplier. As the character successfully hits an enemy, his combat multiplier increases. If the character is hit by the enemy, the combat multiplier drops down to the next multiple of five, or zero if below five.
Fable's game world is dotted with towns where recreational activities not related to combat can be undertaken. Enterprising Heroes can buy trade items such as beer kegs or grain sacks and sell them at other towns for profit. Towns are also prime locations to buy clothing, weapons, or other items. Many towns have houses for sale, which the Hero can buy, furnish, or lease to tenants for gold. Heroes may woo and marry men or women in each town. 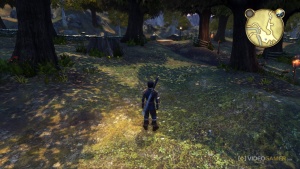 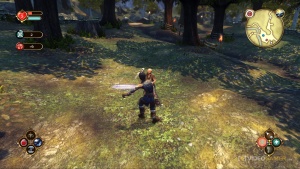