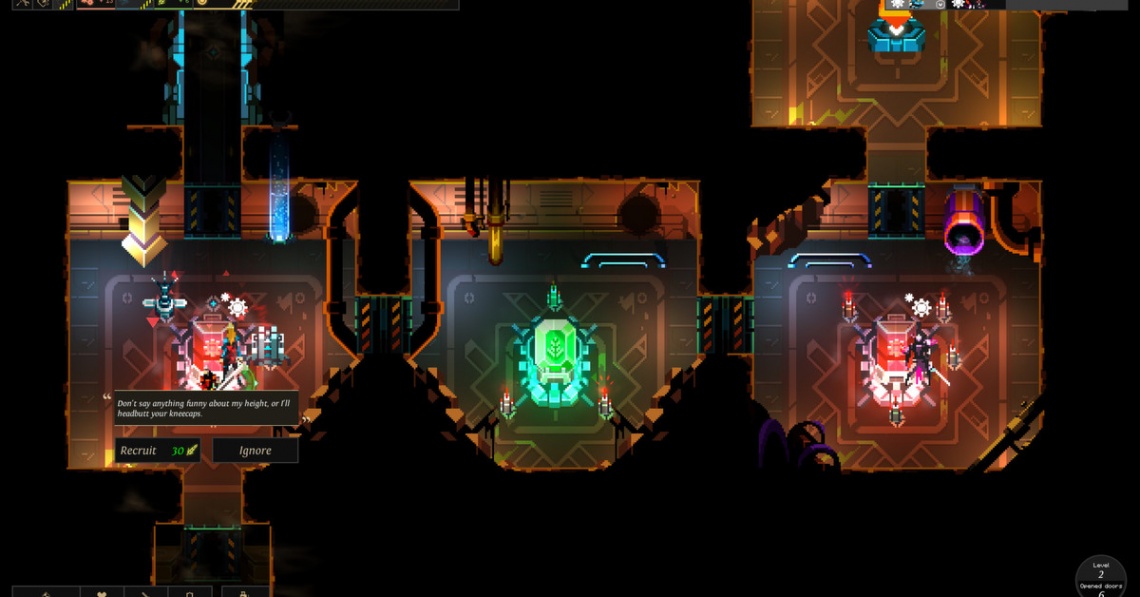 Dungeon of the Endless

multiplayer
strategy
Release: 2014
Dungeon of the Endless is a roguelike game, featuring procedurally generated levels and the notion of permadeath, so that each runthrough of the game is different. The game is based on directing the survivors of a prison spacecraft (crew, prisoners, and civilians alike), having crash-landed on a strange alien planet, through several levels as to achieve escape from the planet. At the start of each game, the player selects two characters with each character having different statistics such as health, attack, defense power, and movement speed, as well as a number of abilities. The player is able to control each character separately or in tandem by directing them to move to the various rooms on the current level or open doors on that level, as well as to initiate any special ability or to heal them. Otherwise, the characters will act autonomously such as fending off any enemies that enter the room to the best of their ability. On the first level of the game, the characters will start in the crashed escape pod with the power crystal, while on subsequent levels, they will start on the elevator that they took from the previous level.
The game plays out in primarily a turn-based manner, each turn marked when a new door on the level is opened. At the start of each turn, the player gains fixed amounts of three resources: Industry, Science, and Food. Industry is used primarily in the construction of turrets and resource generators; Science is used to research new types of turrets and generators, and Food is used to heal the characters, or increase their experience level which improves their statistics, and gives them new abilities. Certain rooms may have objects that can be scavenged for more of these resources. Furthermore, rooms will have Dust, which powers the crystal. As the crystal gains more power, the player can "activate" a limited number of continuous sets of rooms, allowing them to build resource generators and turrets on rooms which have been activated. Players can also deactivate a room at any time to reroute the power to a different room, disabling the turrets and generators in that room. Other rooms may feature item chests, shopkeepers, and research stations, or they may contain survivors that players can recruit to their party (up to 4 characters total).
Opening a new door may also cause monsters to appear, appearing at random rooms across the map in any room that is not activated or lacking its own power source. The monsters will attack both the party and the crystal; killing the creatures has a chance of creating more Dust to run the crystal. The characters will lose health with attacks and will die if it drops to zero, though once all newly spawned monsters are defeated, their health is fully restored. If the crystal is attacked, it will permanently lose Dust, and if this drops to zero, the crystal is destroyed and the game is over. During monster attacks, the player can freely move the characters around between open rooms to obtain the best tactical placement, such as fighting monsters alongside numerous turrets. Once any spawned monsters are defeated, the player can move characters about and build defenses freely until they opt to open the next door.
Once the exit point on the level has been found, the player then must have one character collect the crystal and carry it slowly from the start to the exit point, while other characters protect the carrier from hordes of monsters that appear at this point. If the crystal carrier dies, the game is over, but if all surviving players make it to the room with the exit point, the player advances to the next level. The goal of the game is to complete 12 of these levels, each with more difficult monsters that appear, with at least one character carrying the crystal to the final exit point.
A meta-game exists in that the player can unlock additional characters for starting the game by recruiting new characters they find on levels and either completing the game or three levels with that character alive. Additionally, by achieving certain goals, the player can unlock different gameplay modes, such as one where the characters will start off much stronger than the enemies but will not regain health once a monster wave is defeated, forcing them to rely on food, healing turrets or items to heal.
The game supports online play with up to four players. Each player controls one character, and each gains separate resources on the opening of new doors. New characters can be recruited by one player if there is space in the party, which are then controlled by that character.


This article uses material from the Wikipedia article Dungeon of the Endless, https://en.wikipedia.org/wiki/Dungeon_of_the_Endless, which is released under the Creative Commons Attribution-Share-Alike License 3.0, https://creativecommons.org/licenses/by-sa/3.0/.
Read Full Description
Save & Play Game Later
Images & Video 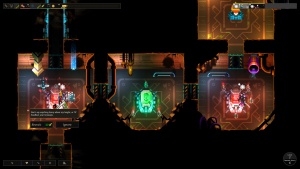 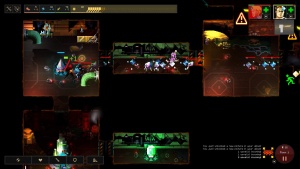