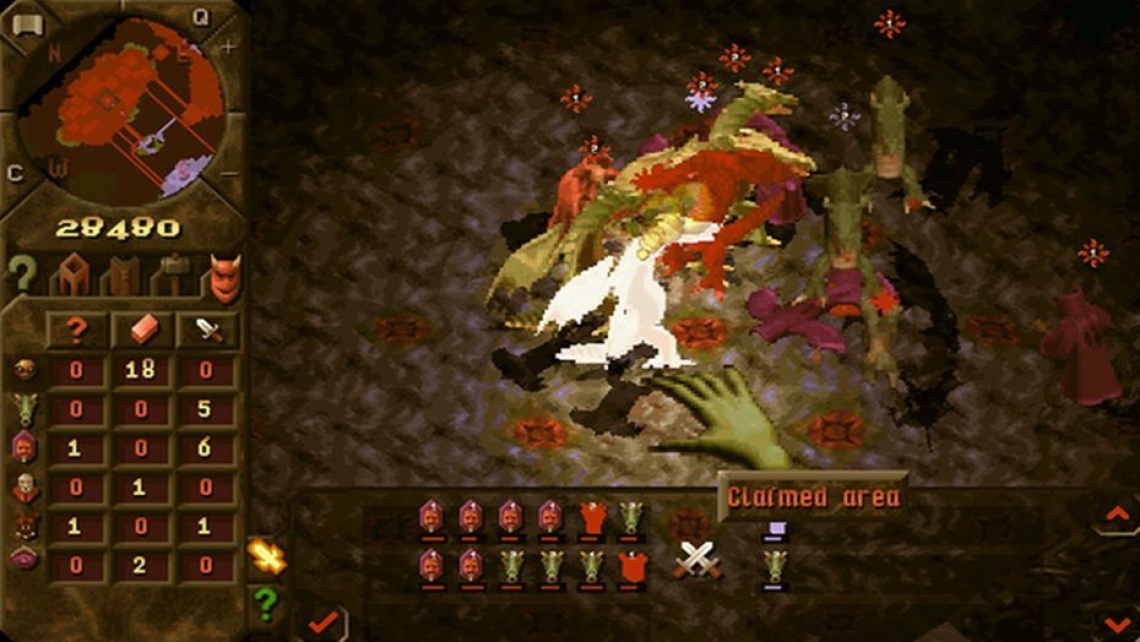 multiplayer
rts
single player
Release: 1997
The player constructs and manages a dungeon, recruiting and catering for minions to run it and defend it from enemy invaders. The primary method of control is the hand, used to pick up creatures and objects in the dungeon, carry them around, and drop them. The hand allows the player to 'slap' creatures and objects, and interact with them. Dungeon Keeper's gameplay exemplifies a dark sense of humour.

The Dungeon Heart represents the Keeper's link to the world. If it is destroyed, the player loses. Along with the heart, the player begins with a small number of imps, the generic work force for dungeon activities: they dig tunnels into the surrounding soil, capture enemy rooms and Portals, mine gold and gems, set traps, and even attack when desperate or threatened. Imps are obtained by using the Create Imp spell. Slapping creatures forces them to work faster temporarily, but removes some of their health. Gold is obtained primarily by digging Gold Seams, and Gem Seams provide an unlimited supply, though take longer to accumulate. Gold is used to build rooms, cast spells, and train creatures. To order the imps to dig a tile, the player need flag the tile. Throughout the game, a "mentor" will advise the player as to various happenings and problems within the dungeon.

Once the Imps are working, the player must then set up a basic infrastructure: Lairs for monsters, a Hatchery (where chickens, which serve as food, are bred), and a Treasury. After connecting the dungeon to a 'Portal', minions will arrive. Minions include dragons, warlocks, and the horned reaper, as well as undead creatures such as vampires and skeletons. As the game progresses, the player moves along a technology tree, unlocking further rooms and spells. Rooms can only be built on tiles belonging to the player. The player is red and the tiles are coloured accordingly. Other keepers have different colours, and the heroes are white. Unaligned creatures and rooms are multicoloured. The player can build traps and doors, created in the workshop. Traps include lightning and boulder traps, the latter instantly killing creatures it comes into contact with. As with rooms, they can only be built on tiles that belong to the player. Traps are not built instantly; Imps need to place them on the blueprint. The Temple is a room where creatures are made happy, and the player can sacrifice creatures to the dark gods. The gods may reward or punish the player, or be indifferent depending on the sacrifice.

The dungeon has a fleshed-out ecology: certain creatures are natural enemies. For example, Flies and Spiders are often found at odds with one another. Common behaviours when a creature is angry include vandalising the dungeon and deserting the player. The creatures are varied in their statistics; some excel at certain tasks, and others refuse to perform certain tasks. Which creatures enter the dungeon depends on which rooms the player has and how large they are; most creatures have prerequisites for entering service. Creatures require paying regularly, and when 'Payday' comes, will head for the Treasure room to collect their wages. Other ways to obtain creatures include imprisoning and torturing them, 'scavenging' (persuaded to defect to the player) from enemy keepers, and performing certain sacrifices at the Temple. Creatures entering via the Portal are at the lowest experience level, and must gain experience, usually by training in the training room. Training creatures increases their attributes (such as hit points) and abilities (such as which spells they can cast). Such spells include lightning bolts, rebounding projectiles, and increasing armour. Creatures will frequently enter combat with heroes or creatures belonging to another keeper. Each creature has a star of the colour of the keeper it belongs to above it, displaying its experience level. The star is a health meter; as a creature takes damage, the spikes turn black. The player has the ability to possess a creature, seeing the dungeon from its first-person perspective and using its attacks and abilities. This is one of the spells; others include speeding creatures up, and healing them.

A world map is available and, at the beginning, the player is allocated one of the twenty regions of a fictional, idyllic country to destroy. As the player progresses through these regions, each representing a level, the areas previously conquered will appear ransacked, twisted, and evil. The goals for each level are straightforward: they generally fall along the lines of eliminating the heroic force or destroying all other Dungeon Keepers. The first few levels are tutorials, teaching the player the basics. Special items are hidden throughout certain levels. Such items perform actions such as increasing the player's creatures' experience level, or revealing the map. They can reveal a hidden level, where the player must perform a specific task, and is rewarded upon completion.

Heroes will appear at various points and times, sometimes accompanied by a tunneller dwarf, who, like imps, are able to dig. The dungeon can be protected from being breached by having the imps fortify the walls. Heroes include giants, wizards, and samurai warriors. Most levels have a 'Lord of the Land', a heavily armoured knight, who must be defeated. In the final level, the Avatar (resembling the Avatar from Ultima VIII), the most powerful hero, appears as the Lord of the Land, and is resurrected after being defeated. He must be defeated again when he reappears with a large army.

Multiplayer with up to four players is supported via a modem or over a local area network (LAN). The game features twenty multiplayer levels, playable as single-player levels.

This article uses material from the Wikipedia article Dungeon Keeper, https://en.wikipedia.org/wiki/Dungeon_Keeper, which is released under the Creative Commons Attribution-Share-Alike License 3.0, https://creativecommons.org/licenses/by-sa/3.0/.
Read Full Description
Get This Game 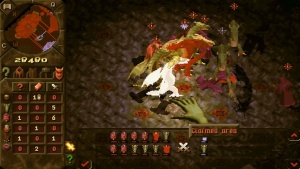 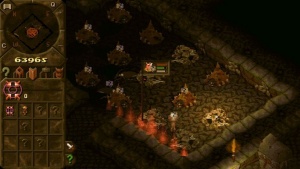