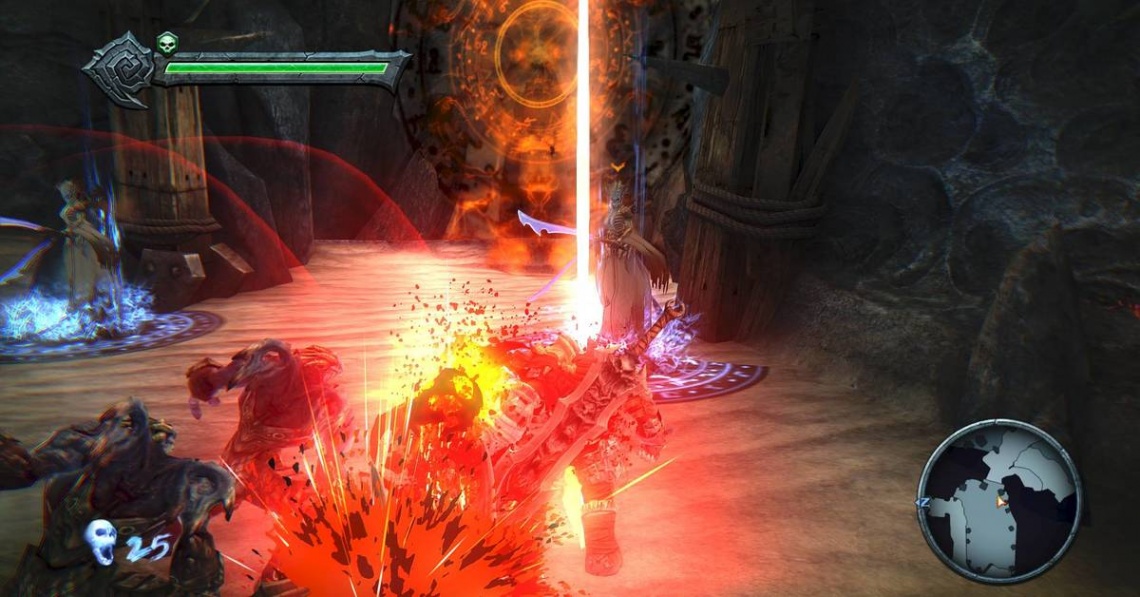 action
adventure
hack and slash
Release: 2010
In Darksiders, players take control of War, one of the Four Horsemen of the Apocalypse, in a third-person perspective. The world is divided into separate locations with many areas initially inaccessible until later in the game. The center of the world, The Scalding Gallow, acts as a hub where War is given new objectives and paths to unlock new areas, many of which require the use of newly gained abilities to progress.

Although War is initially limited to the use of his two-handed signature sword, Chaoseater, he will eventually obtain other weapons throughout the course of the game. He also has a Scythe, which he uses as his other main offensive weapon. Weapons have different combinations of attack that can be obtained throughout the game. Along with combos, players are encouraged to use countering moves, blocks, and swift dodging. Projectile weapons such as a revolver and a boomerang-style throwing blade can also be used. Objects littered throughout the environment can also be used as weapons and projectiles. At a later point in the game, War gains the ability to summon a horse that provides faster movement and increased attack power.

Along with weapon-based attacks, War can also use an array of magic-based attacks, known as Wrath powers, that are both offensive and defensive in nature. The amount of Wrath powers available are determined through the Wrath meter. War's Chaos Form: which transforms him into a large, fiery and extremely resistant entity can be activated once War's Chaos meter is filled.

When enemies are close to defeat, War can perform an elaborate and violent finishing move, instantly killing them. Some larger foes can be briefly ridden and steered into other enemies before being finished off. War eventually encounters large boss opponents that are both giant in size and deal heavy damage, and are themselves puzzle-based battles requiring certain methods and certain weapons to defeat them, and in some cases quick time button events to dodge or deal attacks.

Upon defeat, different enemies expel souls that provide different benefits. Green souls that fill the health bar, yellow souls that fill the Wrath meter, and blue souls that are the game’s form of currency, and can be spent new combo attacks, enhanced Wrath powers, power-ups, and potions. There are also artifacts scattered throughout the world that can be exchanged for more blue souls, with bonuses for completing each set. Additionally, souls can be obtained in chests found throughout the world. Other items that can be located include wrath core and lifestone fragments, whereupon collecting four, War's Wrath or Health, respectively, are permanently increased.

This article uses material from the Wikipedia article Darksiders, https://en.wikipedia.org/wiki/Darksiders, which is released under the Creative Commons Attribution-Share-Alike License 3.0, https://creativecommons.org/licenses/by-sa/3.0/.
Read Full Description
Get This Game 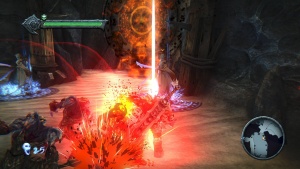 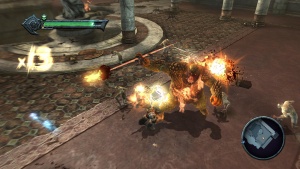