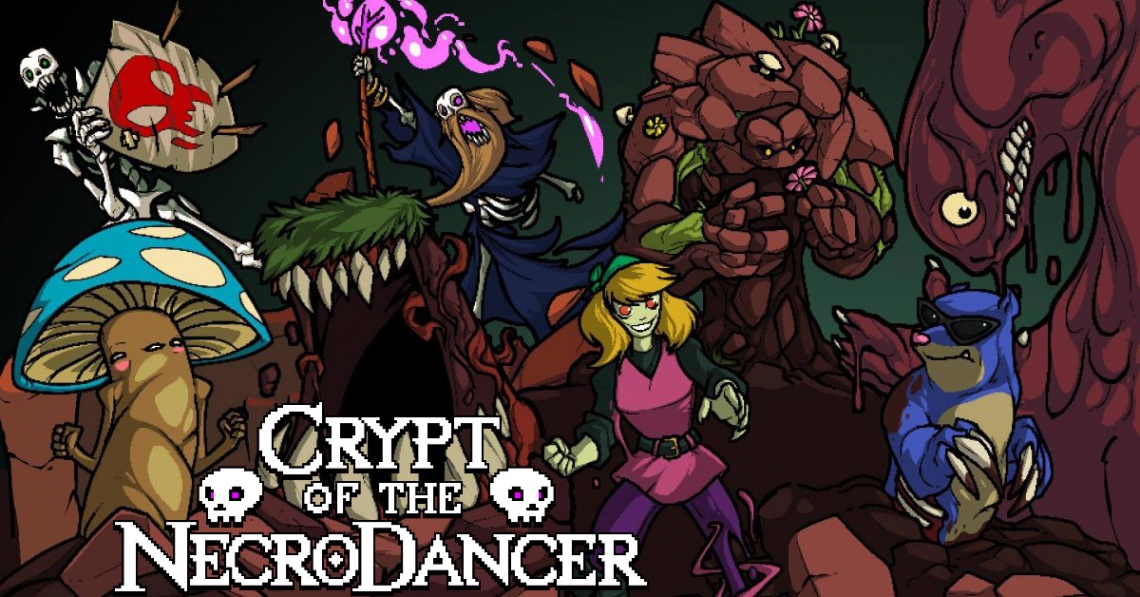 Crypt of the NecroDancer

2d
action
adventure
fantasy
indie
music
rhythm
roguelike
rpg
single player
pixel art
Release: 2015
Crypt of the NecroDancer is a top-down 2D dungeon crawler in which the player controls one of a selection of characters to explore several levels of an underground dungeon that are procedurally generated, similar to roguelike games.
Players can manipulate their character by using either a dance pad, a keyboard, or a gamepad. Unlike traditional roguelikes, the player can only have their character move or attack if they perform the action on the beat of the music. As with many rhythm games, each successful beat match boosts a coin scoring multiplier. Failure to match the beat does not directly harm the character in most situations, but does reset the scoring multiplier and may cause the character to be harmed by a nearby monster if he/she is in their attack path. The character can also be harmed by moving into a monster's attack. When the character's health meter empties, the game is over. Monsters move according to predetermined patterns which the player must learn in order to attack and avoid damage.

Crypt of the NecroDancer screenshot of the 0.244alpha version showing Cadence, a playable character (middle) next to two blue slimes (left), a titanium broadsword (right) as well as some dropped gold coins.
As the player explores, they will collect new weapons, armor, usable items, and treasure; the player's inventory is automatically managed by the game. Defeating monsters yields a number of coins that can be used to purchase items from shops within the dungeon. There are also diamonds that are used for purchasing permanent enhancements to the character's abilities in the game's lobby. The dungeon is divided into four zones of four levels each. The first three levels of each zone require the player to find the exit and defeat a mini-boss to unlock it; the fourth level is a larger boss character that must be defeated to progress further. In addition, the player is limited to the length of the song to complete the level; when the song ends, they are automatically sent to the next level through a trapdoor, forgoing the rewards of completing the level.
The player returns to the game's lobby area after dying or optionally at any time, losing any items, gold, or other equipment, though retaining any diamonds they have found. The lobby features shops where the player can spend those diamonds for permanent upgrades before restarting the game or, if they have completed any zones, accessing the next available zone. The player can also access other game modes, such as "All Zones Mode" in which the player must make their way through the entire crypt without dying. The player initially has access to the main character, Cadence, but new characters with different modes of play also become available as the player completes certain goals: for example, the monk character receives one free item in each shop, but immediately dies if he touches gold. Special trainers and other beneficial non-player characters can be rescued from certain zones, and once rescued, will provide services to the player from the main lobby, such as letting the player train against enemies and bosses, or providing items that the player can but with diamonds and use on their next journey into the crypt.
The songs in the game's soundtracks are ordered in ascending tempo across zones and levels, making deeper levels more challenging than earlier ones. The user additionally has the ability to set custom music for each of the game's levels.


This article uses material from the Wikipedia article Crypt of the NecroDancer, https://en.wikipedia.org/wiki/Crypt_of_the_NecroDancer, which is released under the Creative Commons Attribution-Share-Alike License 3.0, https://creativecommons.org/licenses/by-sa/3.0/.
Read Full Description
Get This Game 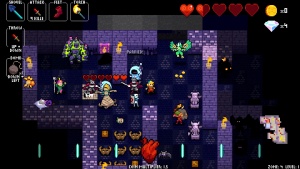 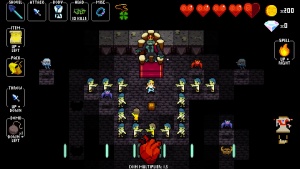