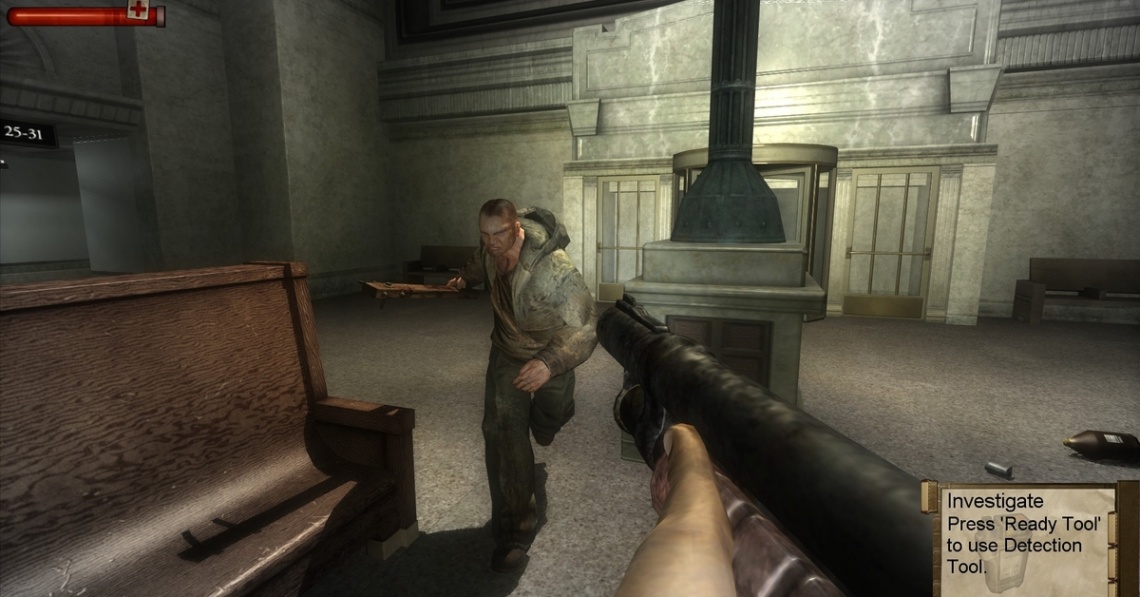 horror
survival
Release: 2006
Combat
Although the game is played entirely from a first-person perspective (only broken for cut scenes), it is not a traditional first-person shooter. Firearms are present, but are somewhat uncommon. Unlike many other games from a first-person perspective, though, firearms are especially deadly, often killing enemies with a single shot. The guns that can be found, or taken from enemies, are only good for as long as the current ammo in the magazine lasts; once this is depleted, the butt of the gun can be used as a weapon. To complicate matters further, enemies operate firearms from the same ammo reserve, meaning once the enemy has been dispatched, the player only gets what ammo was left over from the fight. This encourages players to attack enemies carrying firearms quickly.
The focus of the experience is on improvised melee, allowing players and enemies to collect, or even pull, weapons from their surrounding environments, such as pipes, locker doors, shovels, and 2x4s. The word often employed by the developers of the game to describe the combat is 'visceral'. A quick-kick is available for attacking without, or alongside, a hand-held weapon, and attacks can be unleashed in different directions and configurations, such as left to right or overhead, but combat is notable for not utilizing a combo system, unlike similar titles such as The Chronicles of Riddick: Escape from Butcher Bay. In many cases, blocking is necessary both before and after landing a successful hit. The player can also perform "finishing moves" when the opponent is on his knees, such as headbutting or breaking their neck.
The artificial intelligence displayed by enemies requires the player to think on their feet a great deal more than similar games. Enemies are able to flee and hide effectively, often surprising the player by quickly appearing from a concealed spot. Enemies can also effectively feint, in order to trick the player into blocking at an inopportune time, leaving themselves open for the real attack.
Although there are sharp weapons in the game, one cannot stab or dismember enemies. In fact, the player can almost never wield an actual knife or sword, with the exception being in the School level, where the player has brief access to a meat cleaver. Some melee weapons fall under the class of entry tool, (like a fire axe for a rotten door, or a crowbar for a locked safe) and act as keys in the gameworld, allowing the player to access new areas or locked boxes.
The player also has a taser gun which when used stuns the target, does some damage and allows the player to seize the stunned enemy's weapon. Later in the game, Lieutenant Rosa gives the player a new upgraded taser, which is much more powerful, causing the enemy's legs to give out. One hit or shot after that will kill any enemy. Common uses for it are safely attacking enemies with guns (since it allows players to stun them from a distance and then seize the gun while the enemy is incapacitated), countering an immediate attack (since using the taser does not require the precise timing that blocking does) and obtaining the chance to make a free hit (a hit where the player does not risk being hit first). However, it has to recharge between shots so it cannot be used to bypass the game's system of carefully fighting enemies.
The entire game takes place in derelict urban environments, with minimum lighting. The player must use a flashlight to navigate through the game's constantly darkened environments, while dealing with frequent enemy ambushes.
Near the end of the game the player loses both the flashlight and the taser. This means all strategies which required the taser become impossible and the only personal light source becomes burning planks which means carrying a gun reduces visibility. This effectively forces the player to rely exclusively on blocking, hiding and evasion for defense and close range attacks for offense.

Crime scenes
Condemned directly involves the player in crime scene investigations, offering the ability to, at the press of a context-sensitive button, call upon a suite of forensic tools to find and record evidence. The player character is linked to an FBI lab via his mobile phone throughout the investigation, allowing (almost immediate) remote examination and analysis by his support worker, Rosa. Crime scene evidence can be used to solve puzzles, allowing the player to pass previously impassable barriers, and provide clues to the overall mysteries of the story.
Examples of evidence include fingerprints, footprints, fibers, fluids (such as blood or chemicals), particles, residues, markings/etchings, material, imprints, wounds, small objects, documents, and body parts.
The player character is gifted with the instinctual ability to detect when forensic evidence is nearby, allowing players to bring up the detection and collection tools when appropriate. However, the "instincts" of the character only vaguely highlight the area in which the evidence resides; it is up to the player to methodically sweep the scene and catalog any findings. 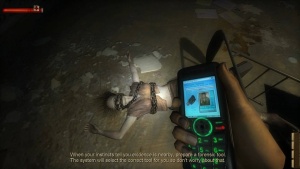 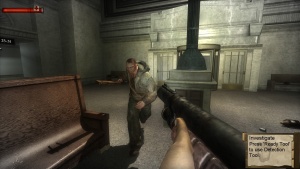