adventure
simulation
single player
turn based
Release: 1994
Sid Meier's Colonization is a computer game by Brian Reynolds and Sid Meier released by MicroProse in 1994. It is a turn-based strategy game themed on the early European colonization of the New World, starting in 1492 and lasting until 1850. It was originally released for DOS, and later ported to Windows 3.1 (1995), the Amiga (1995), and Macintosh (1995).

The game begins in 1492. The player controls the colonial forces of either England, France, The Netherlands, or Spain; the other powers are then played by the computer. Each nation has unique abilities that favor certain strategies. There is a choice between a historical map (America) or a randomly generated map (the New World).
Read Full Description
Save & Play Game Later
Images & Video 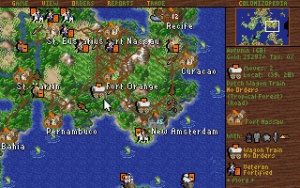